How does nooz work?

1. DAILY AGENDA OVERVIEW
A simple overview of what your day looks like by days of the week and scheduled time slots.
2. Add Activity to agenda
Customizing the alarm settings according to tag, sound, vibration, and snooze reminder.
3. Alarm Alert
Alarm face offers option to "complete" or "snooze", designed so that the user must make an action before leaving the screen.

After presenting these concepts in critique, Concept 3 was chosen for its unique approach to redefining the visualization of an alarm in an operating activity log tracker system. 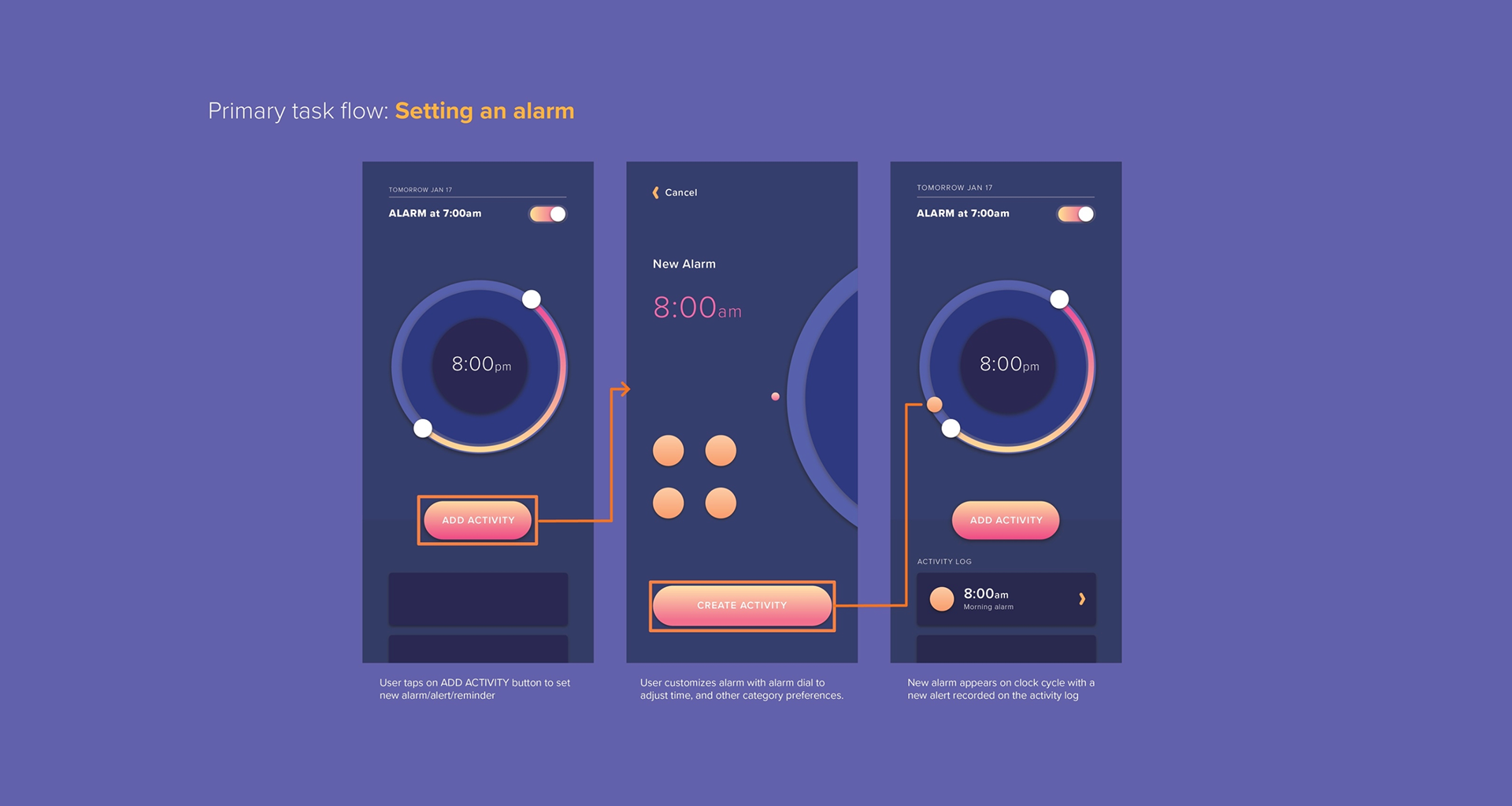 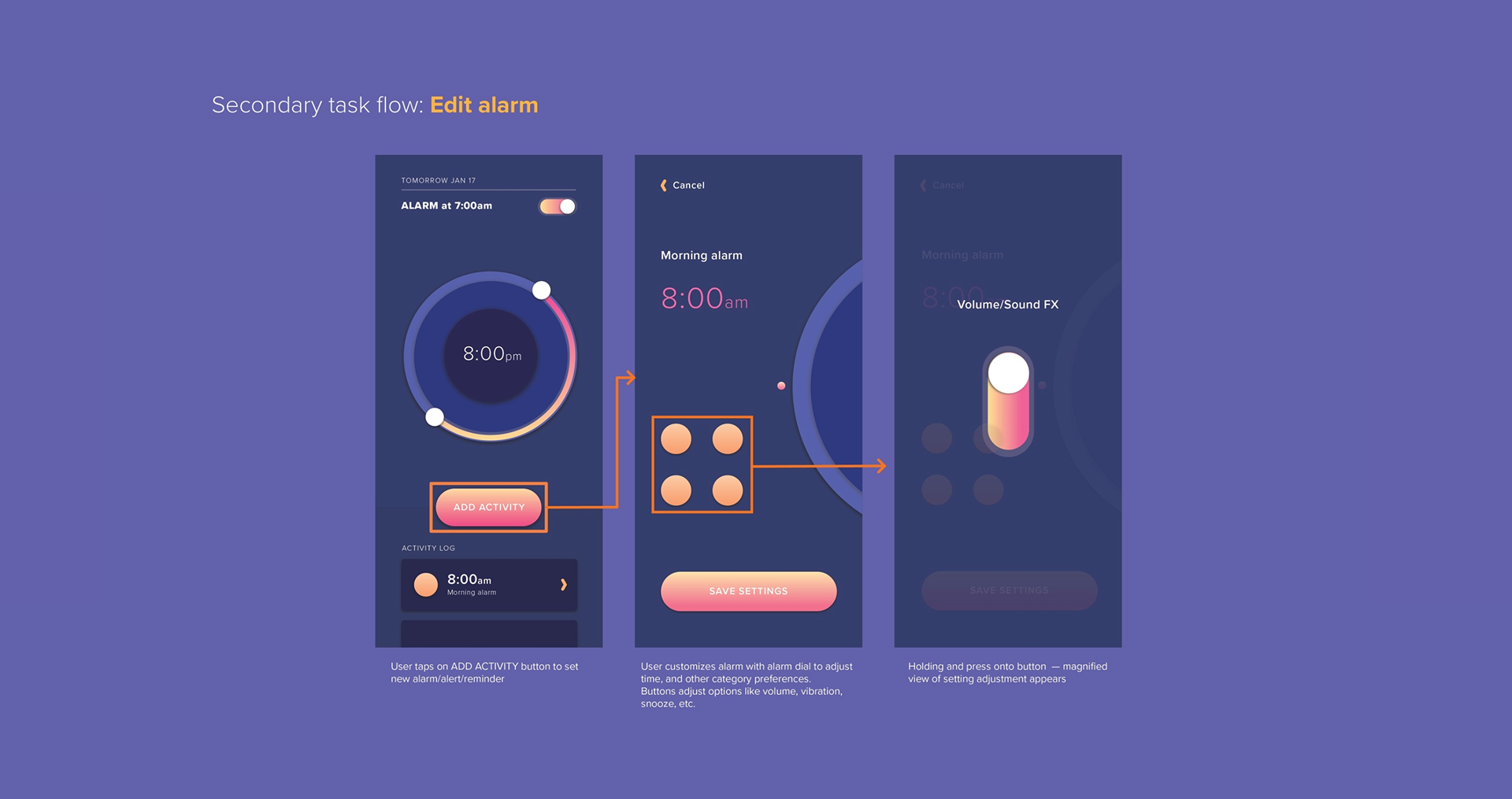 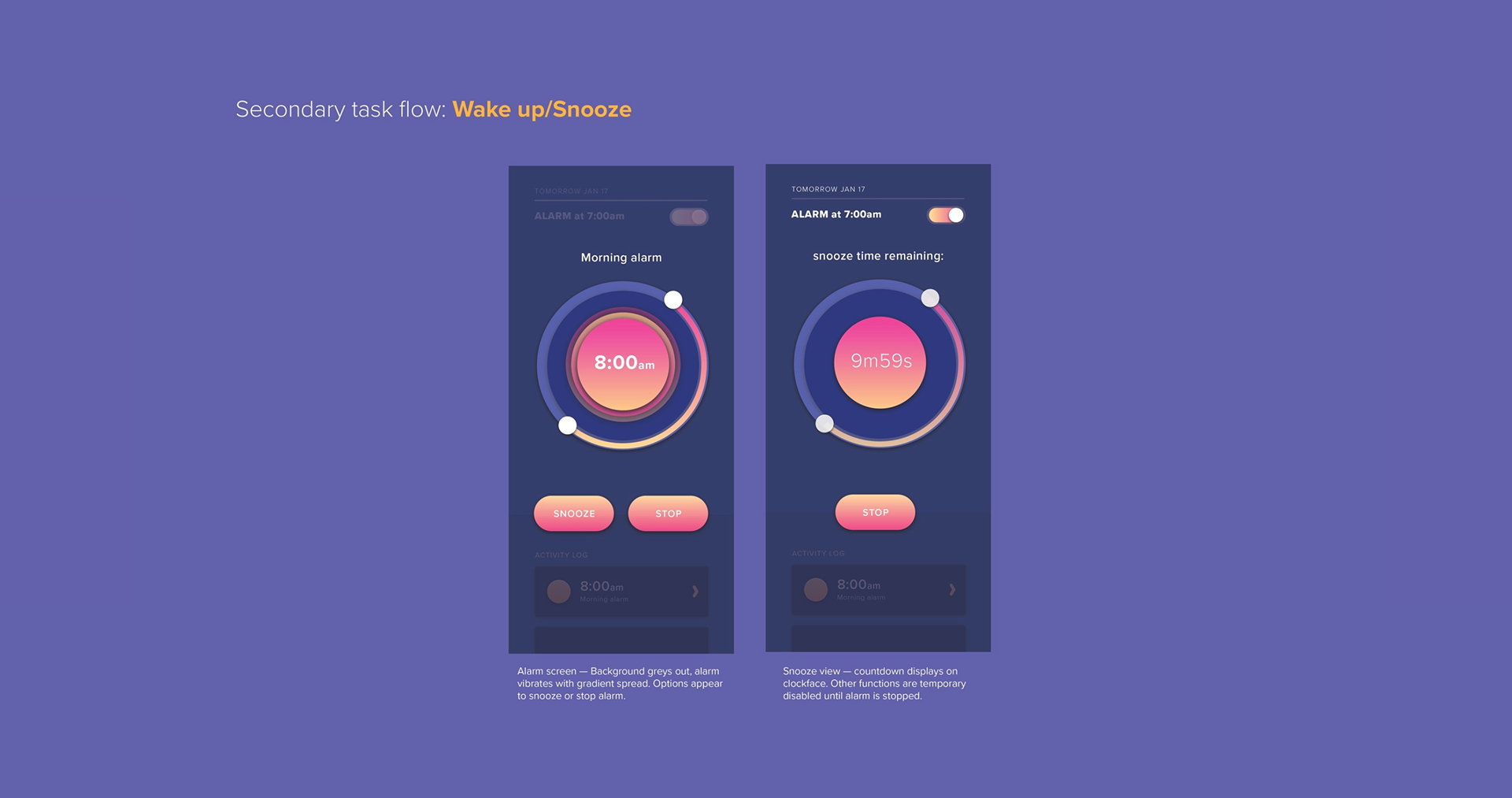 Storyboarding the customize alarm task flow with microinteractions.
From cycle representation to adding activity, customizing alarm settings overlay with 3D touch interaction to add another layer and maximize space within the spatial model.

3: TEST & REFINE
Identifying pain points from user research testing
The purpose of the mid-point user research testing phase is to find any loopholes or challenges within the app design according to user interactions. I recruited a user to test the prototype of my alarm app, instructing them to go through the 3 main task flows and voice out their steps and concerns from each. These insights are taken into account in the refinement stage to improve the design for it to be more robust and responsive to user needs.
Tags/categories of alarms could be generalized
Some users might have color assignment preferences, although this might make the system more perplexing and contradictory to its motive to simplify the alarm task flow.
Visual cycle representation between AM/PM
Promoting a visual representation that could represent tasks between AM/PM cycles instead of “what’s up next” would be a vital component to change within the app's mental model.
“Up next” could be framed into days of the week
The list view of the alarms component on the interface provides an overview of what is scheduled next currently, but it could be beneficial if present and future dates could be accessed.
3D-Force tap hinders app interaction language
The interaction of 3D Tap (long press) is generally used within the iOS system and the user indicates that she only uses it on Apple but rarely within apps.

4: Look & Feel
Craft an aesthetic for your app with a cohesive visual system
A visual style guide is created to summarize the assets used to create the alarm app, including a uniquely designed app favicon, typography specifics, color scheme, iconography, and a mockup of the app key screen.

Constructing the mental model
Visualizing the information architecture of the app in a three-dimensional spatial model. This helps to understand where each component and page live within the app environment.
Base level:
Home screen daily agenda
Second overlay:
Edit/create an alarm
Tertiary pop-up:
Alarm settings/customization 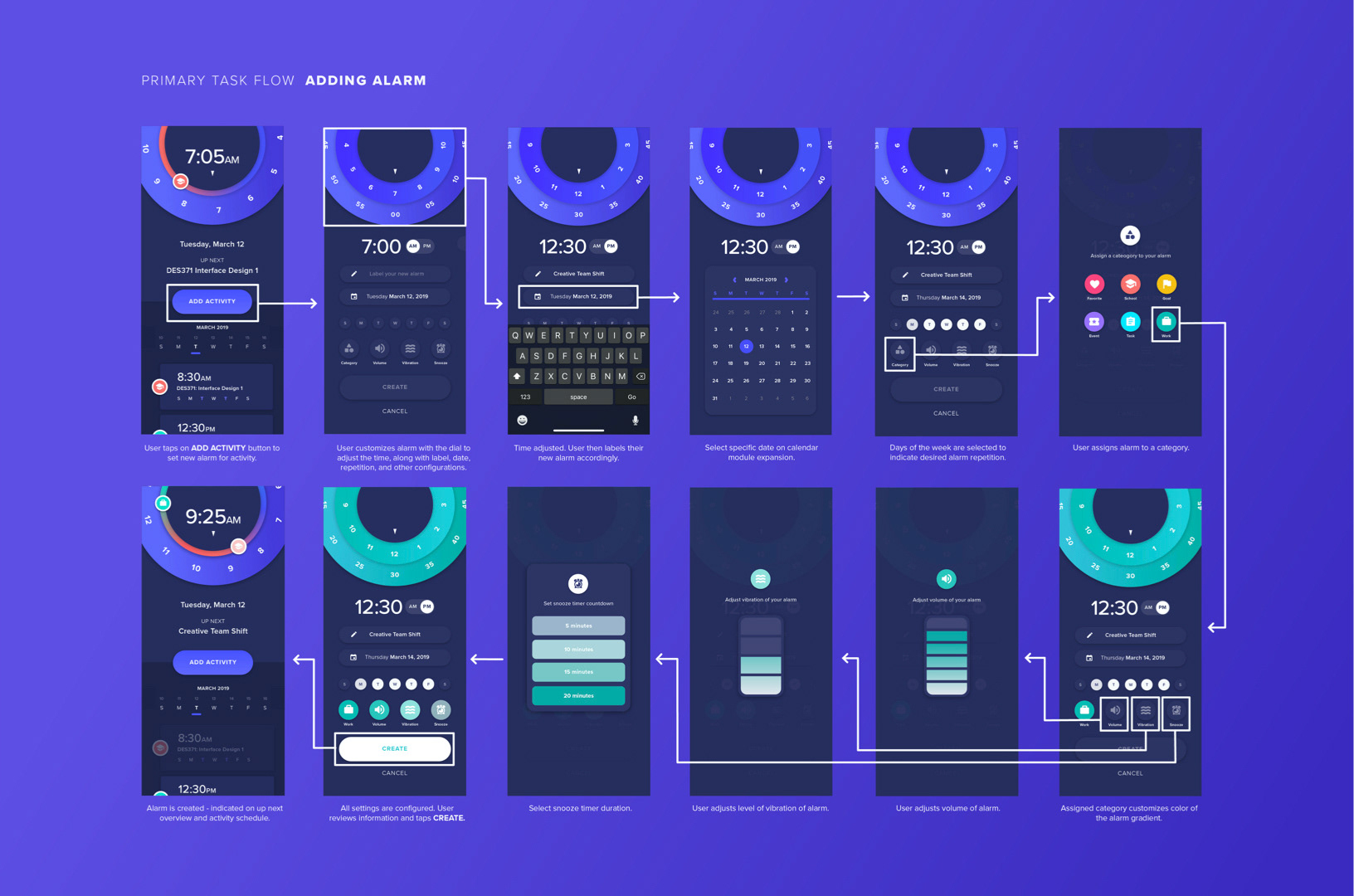 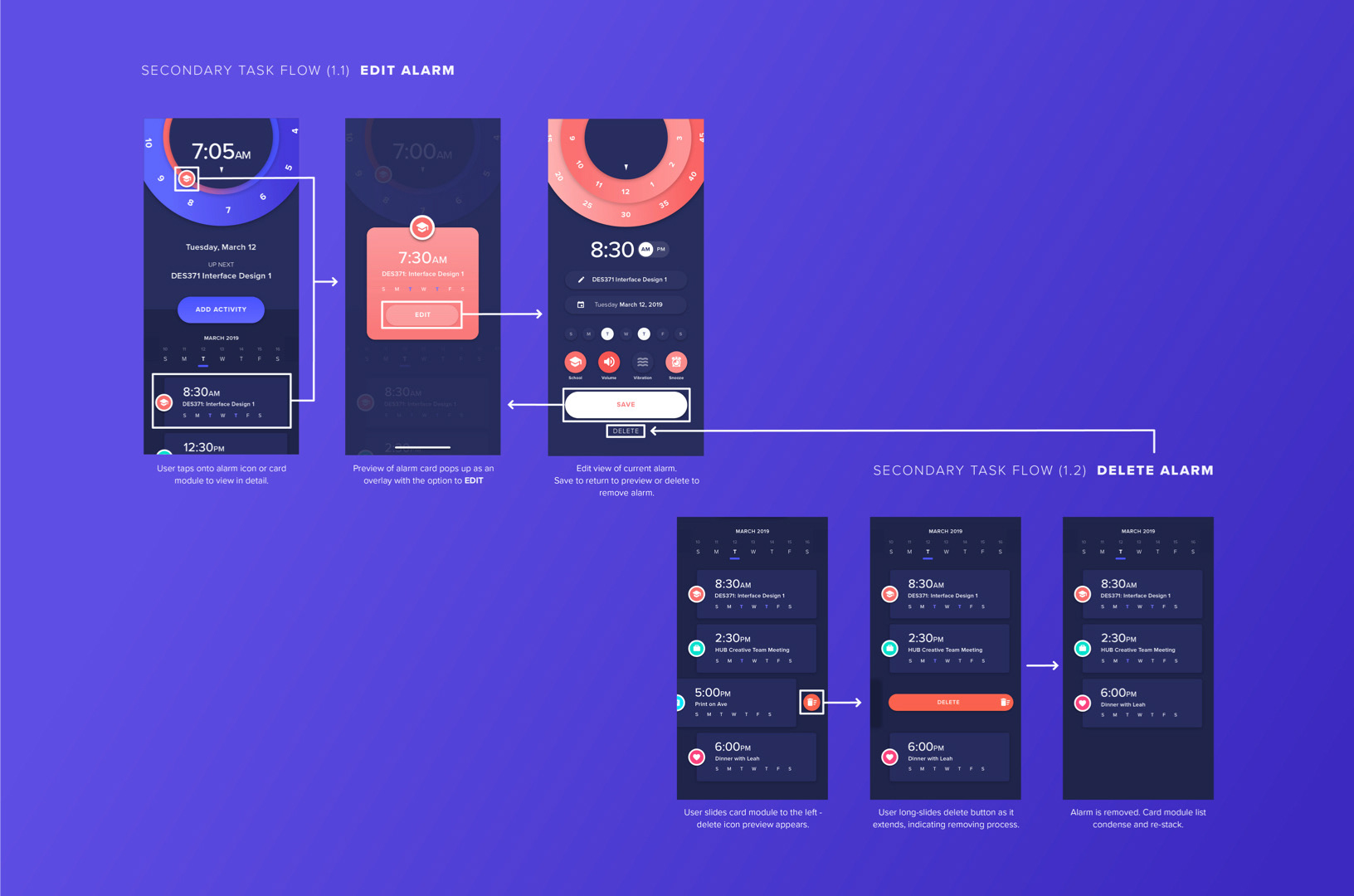 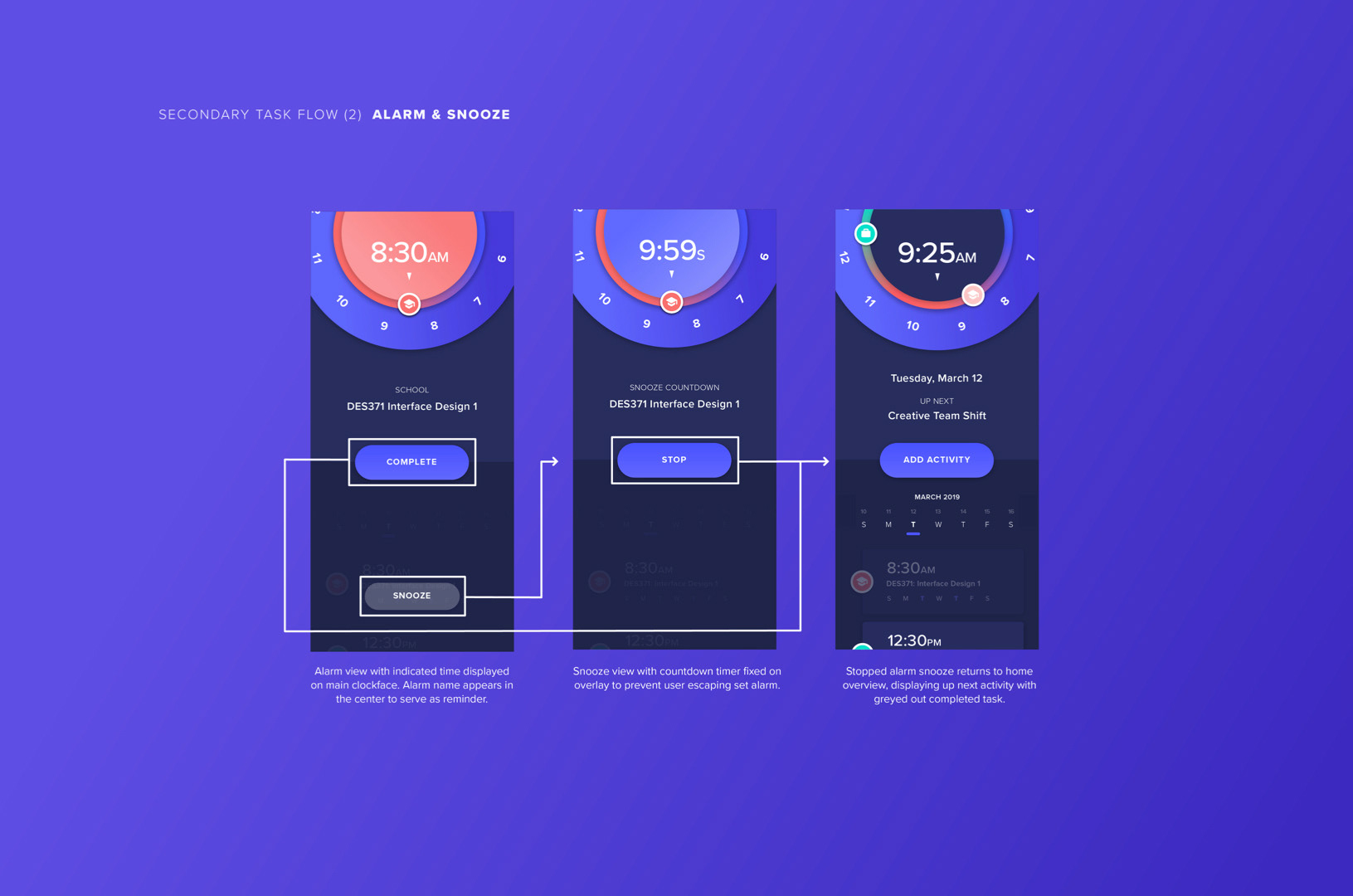 more projects while you're here?